Bathrobe Drinking Part I: The White Snapper from Lion Labs 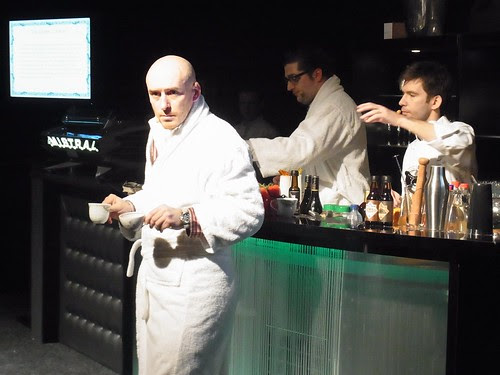 This year, I attended the first Belgium Barshow - Venuez Hospitality and Style.  And, to make a long story short: I enjoyed being a part of this show. It's maybe like being in a bar. The small once I always fall in love with. Xavier Padovani asks me, if I like to join him for the Stage and I was in to do a talk about Gin. After some research, we came up with the Theme: The lost Art of Bathrobe Drinking. Finally, something all true Gentleman should start at one point in life. And, most times you are in the need for a Bathrobe drink, you may just recover from the night before.

So, I suggested to talk about the Red Snapper - the nowadays famous version off the Bloody Mary, made with Gin instead of vodka. But, while doing my research on the Issue, I found out, that modern bartenders are wrong in calling a Bloody Mary with Gin a Red Snapper.


THE TOMATO COCKTAIL from „Here‘s how again“ - by Judge JR. NYC 1929
„This very simple concoction is guaranteed to pik you up no matter how low you have fallen. Take a can of tomato soup and place in a shaker full of ice. Add a few dashes of Worchestershire Sauce and shake well“
1930 „Noble Experiments “(3rd volume in the Here‘s How Series)“ Can of Delford Tomatoes, add salt and shake with 2 or 2 cubes of ice. Worcestershire, tobasco or pepper may be added if desired“

But already in 1892 the was a kind of Paper, called THE MEDICAL RECORD. 12th march of 1892 it quoted the LONDON'S Hospital Gazette while descriing the "OYSTER COCKTAIL" as it is served in the MANHATTAN CLUB New York.


The Oyster Cocktail:
7 small oysters dropped into a tumbler. Add pinch of salt, three drops of fiery Tobasco sauce, three drops of Mexican Chilli pepper sauce, and a spoonful of lemon juice. To this mixture add a little horseradish and green pepper sauce, African pepper, ketchup, black pepper, and fill up with tomato juice. This should be stirred with a spoon, very slightly crushing the oyster, which are then lifted out and eaten, the liquid following as a cocktail.
Serving this drink on stage of Venuez was quite entertaining and it needed a second to find brave bartenders to try it in the morning.

So, the Bloody Mary is dedicated to the HARRY'S NEW YORK BAR Paris. Historicans say, that HNYB PAris starts serving the Bloody Mary in 1920 - 1924 to be precise. The Bartender, often called for inventing this Drink, Fernand Petiote, was at this time working at HNYB PAris and left it round about 1927. He was traveling the World, working in the most famous bars of the world and stopped 1934 in New York city to opne the KING CREOLE BAR in the St. Regis Hotel.

In a Interview from 1964 Pete said: „I iniated the Bloody Mary of today! Jessel said he createtd it, but it was really nothing but vodka and tomato juice when I took it over. I cover the bottom of the shaker with four large dashes of salt, two dashes of black pepper, two dashes of cayenne pepper and a layer of Worchestershire sauce. I then add a dash of lemon juice and some racked ice, put in two ounces of vodka and two ounces of thick tomato juice, shake, starn and pour. We serve a hundred to a hundred and fifty a day here in the King Cole Room and the Hotel“

So finally the Bloody Mary was not created by him. But, as he explains, the mixture of half tomato juice and half vodka was pushed by him to a great drink with spices and aroma. Starting 1934 in New York, he changed the name of this drink to RED SNAPPER. Bloody Mary was too risqué for conservative New Yorkes. As fare as I could find out, RED SNAPPER was first mention at: 1941“Crosby Gaige‘s Cocktail Guide and Ladies Companion“ Drink from King‘s Cole Bar. Some historicans are not sure, how Vodka was excessable at this time in Europe. So, it could be possible that he, during his years on the road, changed to Gin, because Vodka was very rare at this time. But, this is not sure. Arriving 1934 in New York, Vodka was Super hip to serve and so it makes sense to go for Vodka in this drink. The NAme, Jarred and Anistatica came up with this one, may be related to a spice claims tomato sauce. One brand in Cannada is RED SNAPPER. One Product produced in the Area of New Orleans was called The RED SNAPPER SAUCE.

So, finally it looks like that the Bloody Mary is simple Vodka and Tomato Juice, the Red Snapper is the same with a amount of fine spice etc. But all this does not work for us in a Bathrobe Drink Presentation with a GIN DRINK. So, we had to come up with something very new:


THE WHITE SNAPPPER, by Lion Labs
50 ml of Hendrick's Gin
80 ml of l'eau de Tomate
Dashes of Lemon, Worchester, Pepper, Salt, Tabasco if not spiced
shake & serve
A L'eau de Tomate is quiet easy to produce. We had a friend of Xavier on stage, nobody else than Julien Burlat, the chief at the one Michelin Star Restaurant Dôme from Antwerp. First of all, it toke us a few days to win him for this project. Because, he never does something "Out of season" - and currently it is not tomato seasson. So he did us 5 litres of the finest L'eau de Tomate mankind was ever allowed to taste this days. You just heat tomato short time, peal them, mash them, and put them in a very fine filter/strainer for a night. The Eau drops off over night. And if you have a great chief like Julien, he spices this Eau perfect ...you just need Hendrick's Gin to taste!

The White Snapper is a PERFECT drink for Restaurant Bars. Just let your kitchen produce Eau de Tomate over night. And if you start serving White Snappers, you may never serve a bloody Bloody Mary again.

Why your Non-Alcoholic Spirit Brand will maybe fail...

I have to say:  in general, you are right!  People live more and more healthy. Awesome! They focus on exercising, work out a good balance, good and healthy food, taking care of themselves. It is big. Especially in the „younger“ generations. And yes. People drink less and less alcohol. One reason is for health. And then we also have the „hustler“. They wanna be fit the next morning, Conquering the world again. Both are good points. So, yes: The world will need more non-alcoholic beverages. Here you are right and I agree 100% So, you might also be right, to transform „non-alcoholic “ drinks into the Bar wold. You think that some of these people just love the imagination of „feeling“ like drinking alcohol is great. Also that they do not get „the look“ and „the question“ from the people they spend the time over the drink. So you copy the rituals and the habits of enjoying alcohol in a sophisticated way into your product. And this is why you believe in Non-Alcoholic Spirits. Te
READ MORE