The MEERKAT app ! Do not leave it to the boring tech people - call for bartenders - and how it works... 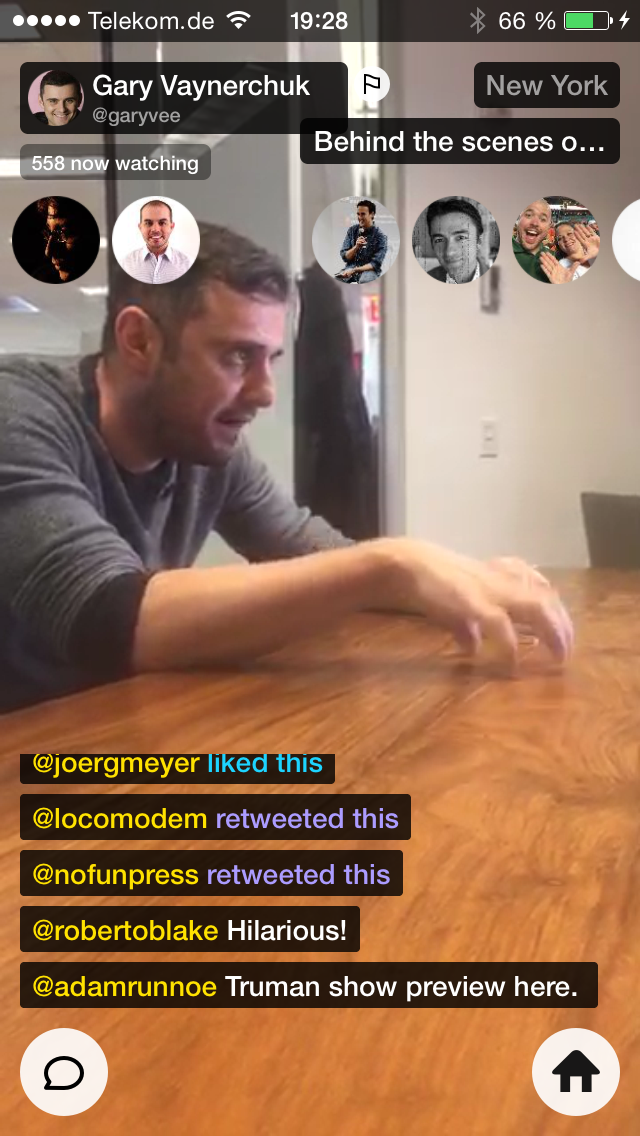 7 days ago, a company called LIFE ON AIR, released a new app for iPhones and iPads. It is called MEERKAT. It is very simple to use. It allows you to live streams from your iDevice to your audience and to the web.  There have been a few live streaming apps before. But all of a sudden this one, only planed as a side project by LIFE ON AIR, has become the new super cool hot thing in the tech world.
So four days ago I read about it, downloaded MEERKAT, and since this day, I am playing around with it (Sorry to  a few of my Twitter Follower, who I confused the last days…)
So, I am trying to explain you how MEERKAT works. Its connected to Twitter. So you need to have an Twitter account first (and hopefully some following there).
Here is how MEERKAT works (as far as I think):
So, if you made it to this point, you may ask yourself: Why the hell is Mr. Meyer telling me all this?
I know, normally I talk about drinks, bars and bartenders. I am not a „Social Media Expert“, I don’t want to be one, and I may better shut up and mix you a drink. But, as a bartender, I can say that I am kind of professional in communication.  The greatest skill for a good bartender is understanding your customers, listen to them and be possible to communicate. So, even if you think I may have no clue about communication, I make a living out of it.
Bartending is communication and from time to time it is important for us bartenders to catch up with the tech guys and the world of communication (which is easy. Tech guys love drinking and always come to a good bar!)
Before I talk about how MEERKAT could be interesting for a few of us in the bar and hospitality industry, I will just explain you what I realised the last days watching and streaming on MERKAAT and whats different to other social media apps.
IT IS ALL ABOUT LIVE and FOMO. Cool!
Currently, this app is a great playground, like all new things.  People play around with MEERKAT and its interesting to see how different they use it. Some people already create kind of art in MEERKAT. Wicked stuff, especially late at night. Lovly. But not my focus.
Most people around in the moment are tech people. And most people talk on MEERKAT about MEERKAT and Social Media Marketing. That’s boring. And lets face it: most of it sounds like cheap copies of @garyvee.
Speaking about the one and only @garyvee - for people like him who have a great following on twitter this will become super interesting. Gary Vaynerchuk f.e. does also do a Youtube Show called #askgaryvee . Since three days, he is streaming live while he is recording the youtube show. Kind of „making of“ - live - extra footage which you never would see in the show.
Today he tweeted a live stream from the „making of“. In two minutes he had more than 500 people watching and very much engaging via comments. And this is just the beginning. „Celebrities“ of any kind will freak of on MEERKAT I guess. BACKSTAGE TIME for fans.
I am a @garyvee fan boy. I love everything he does. Everything. „PERIOD“
When my telephone today told me „Gary Vaynerchuck just started a stream“ I stop everything. I stopped my car and parked it on the side of the street and watch 15 minutes GaryVee Live. Because I WANTED to watch this. Because if you miss it, you will never see it again! Because it was super cool. LIVE and FOMO will kill it. Because its special, intimate and camp fire atmosphere.
It is all about attention. We all use different social media canals and the „established“ ones spam us. Facebook has been taken over by brands and your parents -  NOT cool anymore.  Hard to find something which really interests you.
LIVE and FOMO is very powerful ! Snapchat uses this power. But Snapchat is popular at 12 to 16 year old kids in America. Nothing for serious bartenders.
What I spotted the last days, is that most people on MEERKAT are 20 to 40+, mostly tech related and looks like they have quite money to spend. This is a group serious bartender can deal with. Also, I do not know why, tech related people love got drinks. Many of them are regulars in my bars. Maybe you can explain?
The problem in germany is little bit, that twitter is not used by too much people. But I think it is ok. Facebook is super big. On the other side, everybody uses Facebook to promote their business and bars or personal brand in germany. So it is about leaving the Social Media Highway and try some other way to build a relationship to people. Leave to busy Highway.
If you are cool, and because you are a bartender you are, its about real relationship, cool people and something creative. Not the dump shit promoting Facebook posts. Come on - you are beyond this!
I think if you run a bar in a „Twitter“ Country like US, UK, Canada, Australia etc. MEERKAT can be very interesting. I think this FOMO aspect makes it big. Just some quick thought on what we could do on MEERKAT, please let me know yours:

I personally will stream the next days from time to time and play around. Maybe we have more fun if more of us join. I already had a few stream with people I know. The great people ( @harryraymond @seenickcode) from SWIG (@swigHQ - the only serious drinking app) use MERKAAT quite cool. I would love to have more bartenders and friends involved. I am getting bored from all this Social Media and tech talks on Meerkat. But I love the tool. And I LOVE bartenders. Bring me in your little offices behind the bar and lets polish glasses „together“.
That is also why I write this little piece. Install the app and follow me on twitter. Its @joergmeyer . Please also follow my bars Le Lion • Bar de Paris @barlelion and THE BOILERMAN BAR @boilermanbar - we will stream live and in color from the heart of hamburg my friends.
Lets meet in „real“ time. It is like a good night in a bar. You have to be there. Be there or be square

Why your Non-Alcoholic Spirit Brand will maybe fail...

I have to say:  in general, you are right!  People live more and more healthy. Awesome! They focus on exercising, work out a good balance, good and healthy food, taking care of themselves. It is big. Especially in the „younger“ generations. And yes. People drink less and less alcohol. One reason is for health. And then we also have the „hustler“. They wanna be fit the next morning, Conquering the world again. Both are good points. So, yes: The world will need more non-alcoholic beverages. Here you are right and I agree 100% So, you might also be right, to transform „non-alcoholic “ drinks into the Bar wold. You think that some of these people just love the imagination of „feeling“ like drinking alcohol is great. Also that they do not get „the look“ and „the question“ from the people they spend the time over the drink. So you copy the rituals and the habits of enjoying alcohol in a sophisticated way into your product. And this is why you believe in Non-Alcoholic Spirits. Te
READ MORE